Those who follow me on Instagram (@larvitar) may know that I have quite the fascination with the mysterious, the strange and the macabre. In this special and very uncharacteristic feature just for Halloween, I would like to share stories of 9 gruesome deaths which took place in Singapore hotels.

Have you ever wondered what happens when a violent death such as a suicide or murder takes place in a hotel room in Singapore? To give the staff peace of mind, hotels usually invite heads of various religious groups such as Catholic priests, Buddhist monks and Muslim clerics to conduct cleansing rituals in the room where the death took place. While the room may be kept unused for a certain period out of respect for the deceased as well as for cleaning purposes, it is inevitable that the room will eventually be added back to the hotel’s inventory…for your next check-in.

In my 2020 Ultimate Guide to Singapore Hotels, I shared that hotels are so much more than just a place to sleep at night – they are destinations for conducive business-related stays, venues for special celebrations, opportunities for laughter and joy with close friends, places for remarkable dining experiences and hours of alcohol-laden joyous frivolity, private settings for romance and more. However, as the following stories would reveal, hotels are also places where people are left alone with their darkest thoughts, where acts of desperation take place, where hot bloodedness and passion can take a tragic turn and, indeed, where one may end up spending one’s final moments alive.

I have omitted the names of the properties below out of respect, although a simple Google search would probably reveal their identities without much Hardy Boys/Nancy Drew sleuthing required. Some of the hotels traded under a former name when the gory proceedings took place and have since rebranded. In most of the cases, the actual rooms now would have been renovated or revamped so that they look nothing like the respective rooms at that point of time when the deaths took place.

Will you dare to stay in any of the hotel rooms described below?

P.S. I have actually stayed in most of the hotels below and, in one instance, just next door to the actual room where the gruesome death in question took place. Did I see and hear anything while I was there? That’s a secret I’d never tell.

P.S.S. Click here for a real-life Singapore hotel horror story that has nothing to do with murders or suicides.

While most of the nation may be familiar with the death of a groom who fell from the rooftop level of this Orchard Road hotel in 2009 shortly after his wedding (and the unsettling circumstances which led to his widow’s demise the following year, exactly 35 weeks from his death), few would have heard of the more gristly murder that took place within one of the hotel’s suites in May 1974, when a Thai woman was murdered and then chopped up into 13 parts by her husband before her remains were sealed up in a steel trunk and transferred to their family home in Cairnhill.

This ritzy property is famed for its iconic octagonal-shaped bathtub windows, but one of these beautiful bathrooms was the very scene where a tragic suicide took place in 2009. When cleaning one of the rooms on the 31st floor, a hotel staff member discovered the dead body of a 64-year-old Japanese retiree slumped upright in the shower with a knife protruding from his chest. Based on the contents of his suicide note and subsequent investigations, the former doctor had likely committed suicide after suffering massive losses due to the stock market crash in 2008.

The first Westerner to ever get hanged in Singapore for murder in 1995 committed the shocking deed in Room 1511 of this hotel in the Robertson Quay area. The Briton, a former convict trained in butchery, bludgeoned his roommate – a South African brewery engineer – to death with a hammer and dismembered the body in the bathtub before packing the distinct parts into black plastic bags and tossing them into the Singapore River. The serial killer, who would subsequently be linked to several disappearances and murders around the world after his arrest, then flew to Bangkok and murdered a Canadian mother and her son and went shopping with the money gotten from his victims’ belongings before he was arrested upon arriving back in Singapore.

The South African engineer’s head and arms were never found.

In the marble bathroom of an opulent luxury hotel, a man slit his wrist and bled to death after locking himself in the bathroom…while his wife was next door in the bedroom area. The pool of blood from the victim was said to have seeped out from under the bathroom door, thus alerting the room’s occupants to the gruesome fate of the guest inside.

A 33-year-old Indonesian tourist fell from his 52nd floor suite of this popular Marina Bay hotel in 2012. The victim fell with such force that his remains were scattered in many different places – his head and torso landed on the balcony of a room on the 17th floor, his legs were located about 10m apart in a fountain on the ground floor, and the other remains found within the hotel grounds were so smashed beyond recognition that the first responders were initially unable to determine the body’s gender.

Within one hour of arriving in Singapore and checking into Room 910 of this exclusive Marina Bay hotel in June 1994, a 49-year old female Japanese tourist was viciously attacked by two Singaporean robbers who had tailed her and her companion and barged into their hotel room. While her companion managed to defend herself and survived the robbery, the assailants’ brutal attacks to the victim’s face (her nasal bones, nasal cartilage wall, eye sockets and jaw were severely fractured) caused intense haemorrhaging which led to the obstruction of her airways, causing her to choke to death.

The robbers stole a Seiko watch worth 70,000 yen, a camera, a passport and 65,000 yen in cash before fleeing the scene. They were eventually arrested and imprisoned. The victim’s companion, who suffered only minor facial injuries and returned to Japan after the incident, returned to Singapore to testify in the High Court trial.

Countless online articles refer to this towering property as one of Asia’s most haunted hotels, in no small part due to its supposed location above execution grounds occupied by the Japanese army during World War II. While one can easily dismiss the tales about prisoners-of-war who roam the corridors of the hotel’s higher floors begging for mercy as pure balderdash, one cannot ignore the baffling number of tourists in the past ten years with rooms specifically on the 59th or 60th floor who have plunged horrifically to their deaths from their balconies.

Disturbingly, pictorial captures of some of these deaths – an Australian woman fell onto the 2nd floor parapet above a Starbucks cafe on the ground floor in 2015, a 33-year-old man landed right in front of the entrance of a McDonald’s outlet just 5 days after that, while the body of a Russian tourist had to be removed from a fifth-floor beam where it was stuck in 2013 – remain available for viewing on the darkest parts of the interwebs, and you are strongly advised not to search for them if you wish to have a peaceful night’s sleep tonight.

On an early morning in March 2017, a 23-year-old Vietnamese man fell to his death from the 15th floor guest room of this busy hotel located within one of Singapore’s heritage districts. His body forcefully hit the sky garden’s railing, which cleanly severed his head from his torso. While his body was later found in a drain on the 5th floor, his decapitated head landed outside a restaurant located on the 4th floor.

It is alleged that the fall was linked to physical altercation between the deceased and his friend, a fellow Vietnamese national who was an Institute of Technical Education student.

In this horrific tale involving a 4th-floor room in a hotel a short drive away from the Esplanade, an Indian national had a fight with a pregnant sex worker when she refused a 3rd tryst that night without being given further payment. During the struggle, he pressed tightly on her neck with hard force “continuously for between one and two minutes”, and only stopped when he saw that her eyes were closed, her head had fallen backwards and her tongue was left dangling out of her mouth. He then stripped her of her clothing and valuables and stuffed her naked body under the queen-sized bed before inviting another sex worker to the same room and having sexual intercourse with her on the bed above the dead body of the pregnant prostitute. The Indian national was eventually jailed and caned for his crime.

An autopsy report stated the deceased’s cause of death as strangulation. The deceased’s seven-months-old unborn baby boy did not make it either. 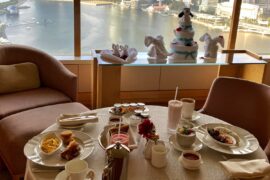 5 Reasons to Book A Stay At The Ritz-Carlton, Millenia Singapore Using The HoteLux App 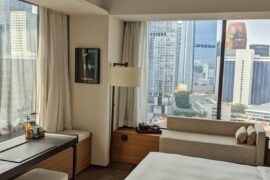