To commemorate the launch of Secret Life of Fatbacks and for my first feature article, I thought it would be pretty interesting to revisit some of my “Greatest Hits” (and by that I mean the posts with the most likes on Instagram, which I presume people enjoyed the most). As I scrolled down the page, I literally LOL’ed at some of my own captions below – whatever possessed me to write some of these things, I’d never know. I hope you’d have as much pleasure reading them as I did writing them.

Below are my most liked posts on Instagram thus far, as of March 2015. Enjoy. 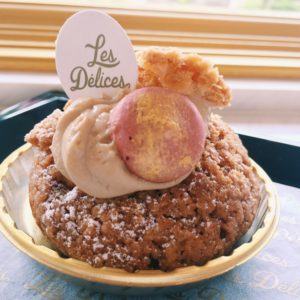 Earl grey milk tea choux. Delightfully crumbly, like the baby boy of a croissant and cookie. The earl grey flavour was, unlike its matcha counterpart, dramatically strong and fragrant, like a Chanel No.5 for urbanite tea leaves. 3.7/5 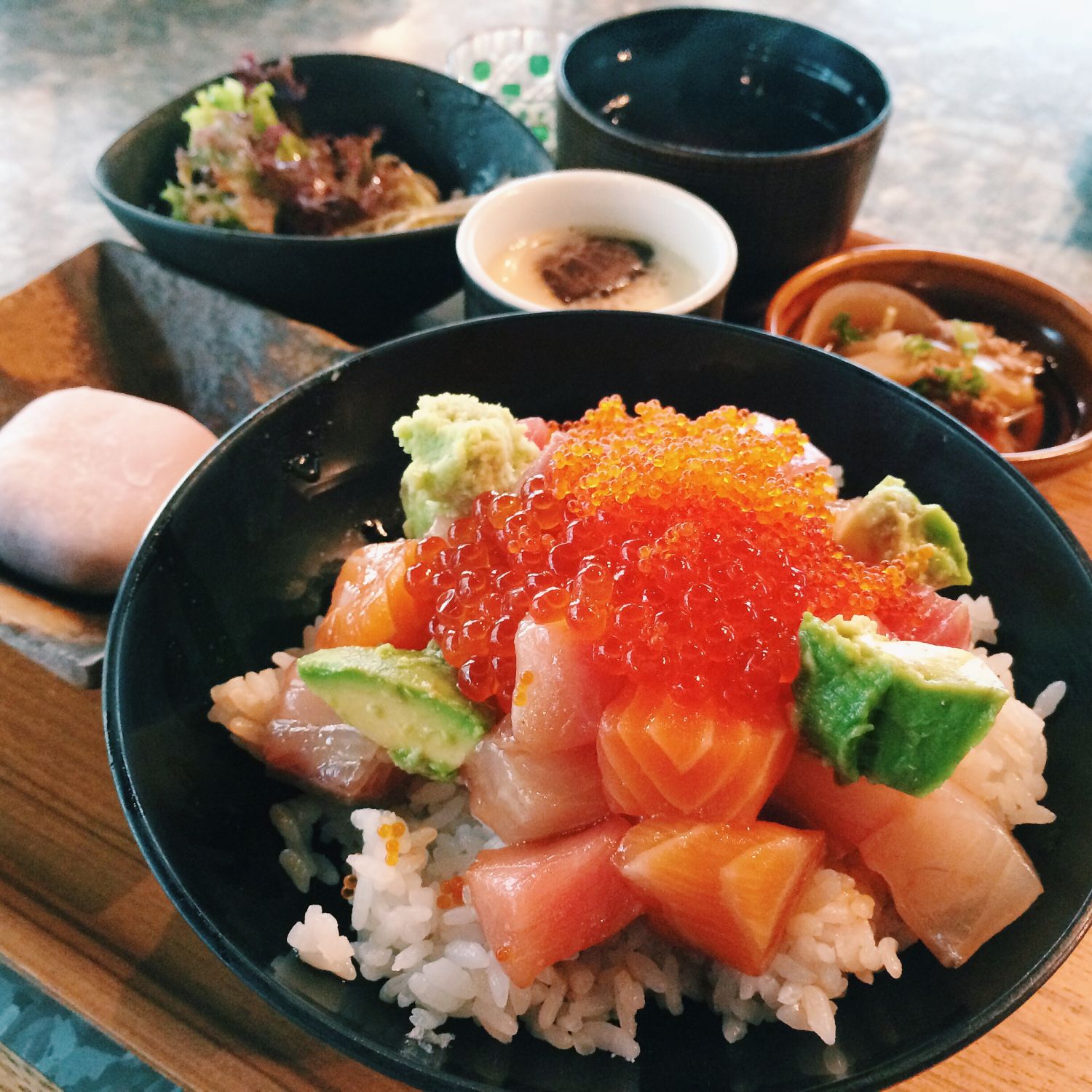 Mix Bara Kaisen Don – assorted seafood sashimi chunks on rice. This is the lunch set, which is excellent value for money since you get chawanmushi, mochi, miso soup and a salad along with the generous servings of sashimi chunks! The chunks were nicely cubed and fat, and the bowl certainly satiates one’s sashimi cravings. One small gripe is that the excess of salmon roe added a steeply salty slant to the proceedings, but that is probably like complaining my Hermes Birkin is too big for my arm. 4/5 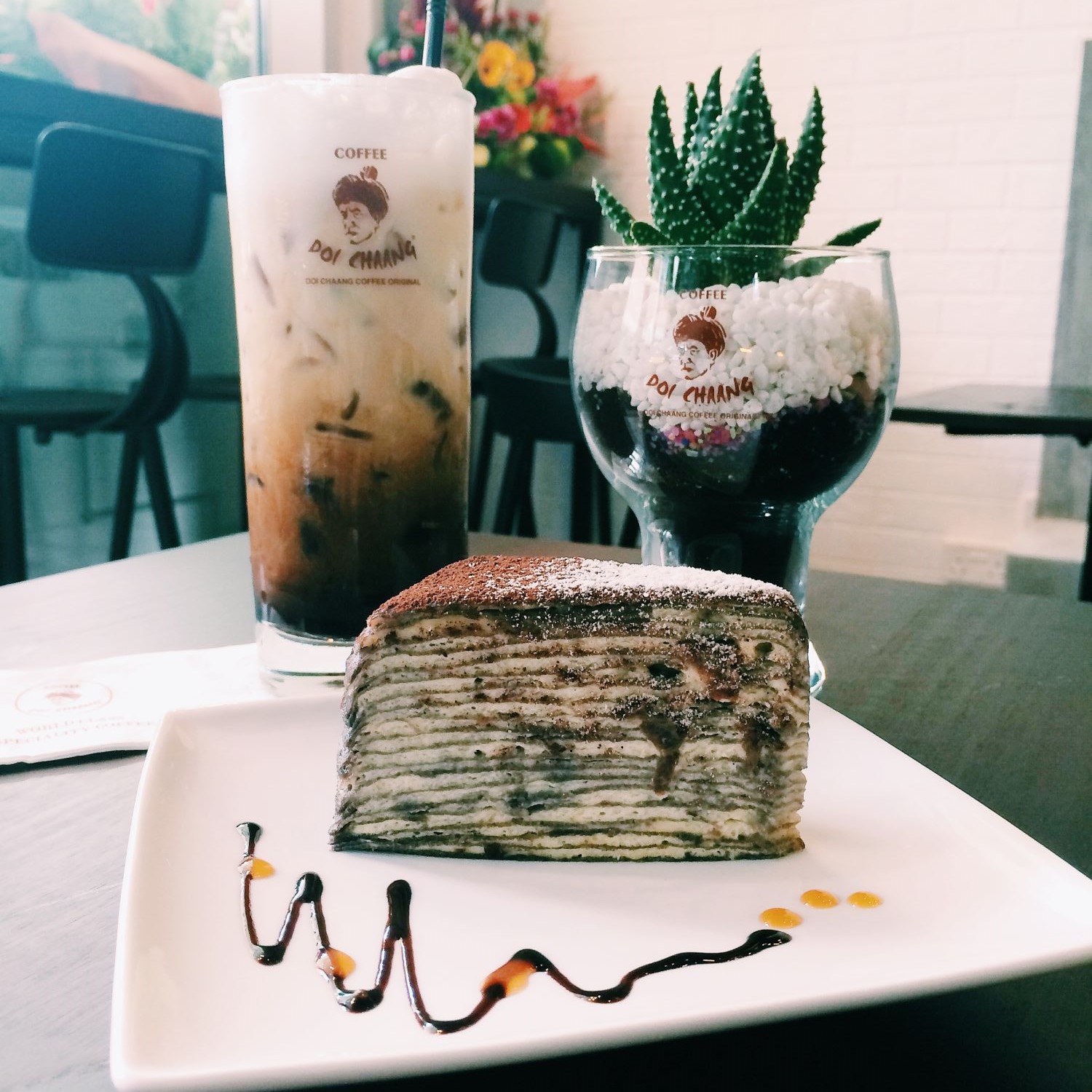 Iced Doi Chaang coffee with a rum and raisin mille crepe cake. The former was enjoyable in its masculine sweetness, like an NSF Commando officer with his girlfriend. However, despite its whiffs of alcohol, the cake tasted rather flat and tired, like the same officer after outfield exercise. Coffee: 4/5 Cake: 3.25/5 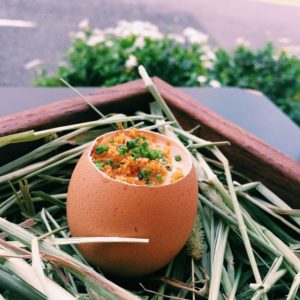 Mini Spanish Breakfast – egg, mushroom purée, chorizo and potato espuma. Essentially how an egg would taste if it were the product of a hen’s tawdry liaison with a very charming pizza with a handlebar moustache. 3.7/5 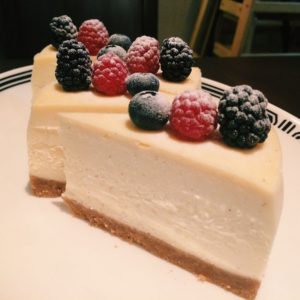 Cheesecake. Light and not too cheesy, but remarkably tastes like yogurt meets Yakult, solidified. 3.5/5 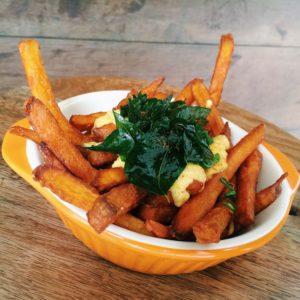 Salted egg sweet potato fries. Like seeing adverts for the Amazon River Quest at the River Safari and you go expecting to be able to check out the adorable Capybaras, then when your boat passes the enclosure all you see is a brown fluffy butt disappearing behind the tree. 3.4/5 Breakfast waffle with maple syrup, fried egg, choice of streaky bacon and added smoked salmon. The waffles were essentially McDonald’s hotcakes who accidentally walked into a waffle iron. They were buttery, salty and slightly crispy on the outside. The twirly pig meat was an appealing mix of chewy and crispy, while the egg yolk tasted exactly like soft-boiled egg. Very satisfying. 4.1/5 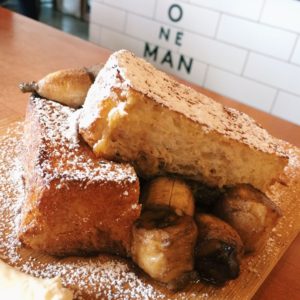 Brioche French Toast with Caramelised Banana, Salted Caramel & Fresh Cream. Undoubtedly one of the best brioche French toast I have ever tried – the brioche is fluffier than an Angora rabbit and decidedly un-breadlike in texture. Paired with the restrained salted caramel and goreng pisang-esque sweet and gooey banana chunks, it’s as if the meal wants to smother me with pleasure. 4.2/5

Waffle Ispahan – rose waffle with raspberry sorbet and litchi sauce. The waffle felt a bit flaccid (not possessing the turgidity of the Horffles) but the warmness and fragrance of the rose flavour enlivened the proceedings. The multiple elements – rose, raspberry and lychee – shared the throne amicably, with no diva catfighting in sight. Yet another memorable waffle from Les Patisseries, and a very pleasant and successful homage to the Pierre Hermé creation. 4/5 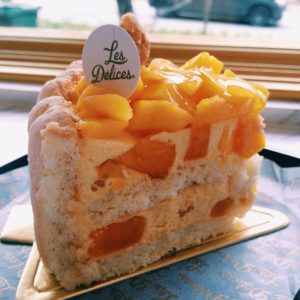 Mango Charlotte. Like the girl with 12.4K Instagram followers who looks really summery and poses in pictures staring shyly away from the camera whilst smiling with milk-shampooed lustrous hair and pouty cherry lips, but once you meet her in person you find out that past the blogshop dresses and flowers in her hair she’s just Phay Pooi Leng from 802 Bukit Batok West Avenue 5. Nice and juicy mango chunks, mind you. 3.2/5 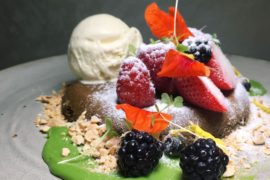 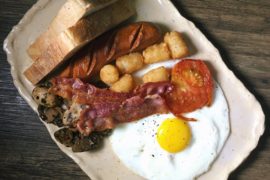 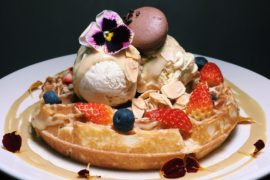