12 February 2021 will mark the beginning of the Year of the Ox, and many restaurants in Singapore (both Chinese and otherwise) have prepared indulgent and delicious ways for you to usher in the bovine era. Here’s our picks from this year’s Chinese New Year offerings that we have tried so far.

From 18 January to 26 February 2021, 藝 Yi by Jereme Leung will present its Lunar New Year Dining experience in the form of both a la carte selections as well as set menus. Their Longevity Yu Sheng with Abalone, Arctic Surf Clams and Salmon (S$208++) is served with Master Chef Jereme Leung’s signature Yunnan Rose Dressing, while elsewhere on their a la carte menu, the Braised Abalone, Yunnan Ham, Sea Whelk and Cabbage Consomme nourished deeply and the Steamed Cod Fillet with Fermented Black Beans and Olives tantalised with its fermented savoury appeal. I must say the playful Fermented Rice Wine Ice Cream certainly left a giddily strong impression.

Yàn presents its Chinese New Year highlights from 15 January to 26 February 2021. Aside from six set menus for dining-in ranging from five to eight courses (from S$128++ to S$228++ per person), the Cantonese restaurant will also offer a lavish Yàn Harvest Pen Cai (from S$300++) for both dine-in and takeaway. The crispy vermicelli-mountained Abalone & Yellowtail with Gold Foil Lo Hei in ‘Shun De’ Style (from S$92++) made for a tremendously fun fish toss, while elsewhere the Roasted Duck Marinated with Mandarin Peel Sauce was slicker than an undercover spy and the Braised Spring Chicken with 6 Head Whole Abalone conjures serious feels of home-cooked family comfort in unexpected ways.

Two Michelin-star Chinese restaurant Shisen Hanten (the highest Michelin-rated Chinese restaurant in Singapore) presents seven auspiciously-themed Lunar New Year set menus from 11 to 26 February 2021, from the entry Prosperity menu (S$138.80++) to the premium Majestic menu (S$298.80++). Their Poached Dumplings stuffed with Minced Kurobuta Pork and Porcini Mushroom served up moist, meaty pleasure, with the accompanying vinegary dip adding saucy intensity, while elsewhere even the most hardcore keto diet enthusiasts would not be able to resist the soft, slurp-worthy charms of the Braised Glass Noodle with Lobster in Superior Broth. The delectable Steamed East-spotted Grouper with Kelp, Red Date, Cordyceps and Mushroom in Superior Soya Sauce Wrapped in Lotus Leaf is probably my favourite fish dish in this round up. 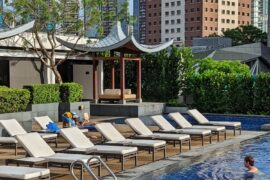 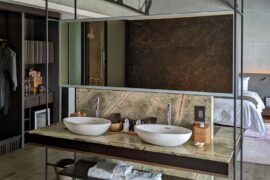 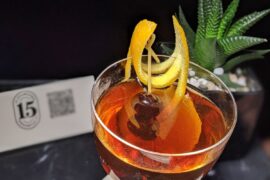