Last year, I embarked on a year-long rhythmic cycling journey as part of my research for The 2021 Ultimate Guide to Spin Studios. Starting with a compulsory beginner class at Absolute Cycle and subsequently an unlimited package at R10T for several months, I slowly made my way around the many spin studios in Singapore, from the youth-skewing Revolution and Aurora as well as neighbourhood-focused boutique studios such as AXIOM, XYCO Studio, Sync Cycle and Popsicle to more adult-centric and edgy spaces such as Ground Zero, CruCycle and Ally.

The spin scene is a a fast-evolving, fascinating universe that defied my preconceptions and expectations. Far from the day-glo, frivolous and female-centric experience which sits in the same basket as Zumba and trampoline fitness classes that many picture rhythmic cycling to be, spin classes have pushed and stretched me in ways that not even strength and conditioning classes at decidedly more “macho” gyms have. Since I started my spin journey, I have come to better understand the various reasons why people attend spin classes, what one can achieve on a stationary bike as well as the numerous different forms a rhythmic cycling class can take.

These are the 5 things I learnt about spin classes and the spin industry in Singapore.

I used to assume people attend rhythmic cycling classes purely for the exercise. However, based on my observations from various conversations and social media behaviour, I realised there are so, so more different possible motivations behind a person’s attendance at spin classes. These reasons may include, without limitation:

YOU CAN DO MANY THINGS ON A STATIONARY BIKE.

Most riders would be familiar with the basic building blocks of rhythmic cycling – pushes, presses, tapbacks, body rolls, crosses, jumps, climbs and runs. However, I have since learned there is so much more to spin choreography than just the aforementioned movements.

My first taste of hands-off choreography – that is, when you are off the saddle and either one or both of your hands leave the safety of the handlebar – was quite a rude shock, and my initial attempts involved much clumsiness and elephantine crashing of both hands onto the handlebar to regain balance and stability. I started off with relatively simple movements such as pulsing with outstretched arm raises and “screwdrivers” (i.e. when your arms form an X and you twist them 90-degrees clockwise or anti-clockwise), and eventually progressed to more challenging moves such as the “Pontianak” and the “Watermelon” (running while extending and retracting your arms), running front-back-front claps as well as holding your arms in an X or even doing boxing style moves like jabs, hooks and crosses throughout an entire run…all the while remaining on beat.

That being said, choreography does not have to be hands-free to be difficult – towel climbs and runs (when you wrap your towel around the handlebar and grip onto both ends while climbing and running), high resistance jumps (when you alternate between seated and off-saddle pedalling when the resistance is turned up high), planks (when you rest your elbows on the handlebar and run), fast jogs (which require your legs to pedal uniformly fast through the entire track), weighted runs (when you are holding on to or doing things with a dumbbell with only one hand on the handlebar), extended runs as well as fast sprints (you are basically flying) all feature elements of endurance, stamina and/or the use of your core.

SPIN CLASSES DO NOT COME CHEAP.

The start of one’s spin journey is often fraught with financial peril, lack of guidance as well as imperfect knowledge. From the point that you decide you want to try a spin class, there is no easy or obvious way of discerning what studios are out there, which instructors to go for and which packages to buy.

There is always the question as to what is reasonable – or sustainable – to pay for spin classes because of the industry’s pricing structures. On their respective websites, studios will usually indicate the price of a single drop-in (usually around $40) and then upsell class packages which reduce the price per class the more classes you pay for upfront. A sensible package drives the cost per class to around the comparatively affordable $20+ price range or less, although the average cost per class at pricier studios such as CruCycle and Ally typically still hover around the $30 range even when you purchase a jumbo package or a promotionally priced package. (Of course, there is usually a correlation between the cost of a class and the quality of the client experience, e.g. luxurious bath amenities, spacious shower stalls etc.) And then, on the opposite end of the spectrum, you see studios like Revolution offering classes for as low as the equivalent of S$10-15 per class on ClassPass and there is also the outlier R10T which offers unlimited spin sessions (along with yoga and HIIT classes) for a weekly membership fee. Many studios frequently offer promotional deals off their standard packages and are also available on ClassPass if you prefer a looser drop-in style relationship (e.g. CRNK, Aurora). It all boils down to your budget from a long-term perspective as well as what you are willing to pay for your spin experiences.

Because of the potentially high cost of spinning regularly, it is very common for a new rider to purchase/share a 50 or 100-class package when they first start spinning as a matter of financial prudence. (Everyone will know at least one person who bought/shared a 100-class Absolute Cycle package and is still trying to clear the seemingly endless package.) However, being tied to a longer-term package impedes your ability and freedom to explore other studios/instructors and eventually Goldilocks your ideal studio in terms of guest experience, intensity and cost. For riders who invested in a longer-term package, they may never find a good reason or time to look beyond their first ever studio and discover the expanse of different spin studios out there, each with their own strengths and weaknesses. (The differences between the many spin studios is covered in greater detail in The 2021 Ultimate Guide to Spin Studios.)

THE START OF YOUR SPIN JOURNEY IS OFTEN A ROCKY ROAD.

Without recommendations and guidance from existing spin enthusiasts, a new rider would not be able to identify the most suitable studio for taking their first steps into the world of rhythmic cycling based on their preferences, use case as well as fitness level. The search process is made more complicated by how studios approach onboarding for beginners differently. Some studios insist on a mandatory beginner class before you can book the regular classes (e.g. Absolute Cycle, AXIOM); some offer fundamental/beginner classes on their schedules but leave it solely to your choice and discretion whether you want to attend those before trying regular classes (e.g. SPYN, Lumi Cycle, Aurora, Ascend Fitness); a few studios incorporate a primer at the start of each class on the different basic choreography as well as the correct form to adopt on the bike before segueing into the class proper (e.g. Ground Zero).

However, for the majority of studios, the instructor will simply survey at the start of class whether there are newcomers before (in an ideal situation) either adjusting the session’s intensity and difficulty levels accordingly or verbally advising inexperienced riders not to attempt choreography if they are unable to keep up and to sit down anytime they need to.

Instructors are a key factor in the overall spin equation. Every instructor is different in terms of personality, appearance, vocals, physicality, quality of instruction, energy, vibes, musical inclinations and choreography. The selection of the first few spin instructors you ride with are rather critical – aside from shaping how you might feel about the studio and rhythmic cycling in general, they are in the position to equip you with necessary techniques, form as well as good safety habits. However, unless you had specific recommendations from friends on whose classes to go for as a newbie, it is really down to luck of the draw whether you get instructors who will set your spin journey on the right note. You may choose not to purchase a package with the studio because you were turned off by how lunatic the instructor’s choreography was/how chill and unchallenging the class was when perhaps, in actual fact, these specific instructors may be outliers in the studio’s diverse team which may comprise other instructors whose style may suit your fancy better.

This issue is compounded by how, apart from the low barriers to entry for becoming a spin/fitness instructor in Singapore, there is no applicable industry standard as to how much or what type of training an instructor needs before being able to lead a spin class. There are studios with very formalised training programmes and then there are studios which allegedly debut instructors with minimal training who have only ever done indoor cycling for a month (?!). As such, there are wildly divergent standards when it comes to the quality of instructors.

If a beginner happens to have scheduled their first class at a studio/with an instructor which does not suit them, be it in terms of vibes or difficulty, it is highly likely that the rider might get completely lost amidst the fast-paced proceedings and not enjoy the class as intended. Without guidance on form and technique, the rider’s risk of injury is higher and the rider may not be able to reap the possible fitness and health benefits from the session. There is also the risk of physical overexertion and rhabdomyolysis, etc.

NOT ALL RHYTHMIC CYCLING CLASSES ARE BUILT THE SAME.

Most people I know have very specific impressions of what rhythmic cycling entails. Some think it’s a light-to-medium intensity, music-driven workout in the same vein as Zumba and Aerobics. Some believe it is a frivolous form of exercise performed primarily by Xiao Mei Meis or middle-aged women decked in branded active wear such as Lululemon as part of a curated “lifestyle”. Others picture it as simply a glossier, sexier take on the more resistance-based RPM cycling, but with jazzier choreography.

Not all of the above is untrue. Spin cycling is indeed at its core essentially cardio on a stationary bike, usually involving choreography and soundtracked by high BPM tracks. However, what constitutes a spin class differs from studio to studio and instructor to instructor. While the average rhythmic cycling session will typically involve basic choreography and the standard combination of high resistance climbs, jumps, runs as well as the obligatory weights track, that is not always the case. The following are types of classes which may deviate from the standard format or are unique in their concept:

Check out more stories from my “5 Things I Learnt About Fitness” series: 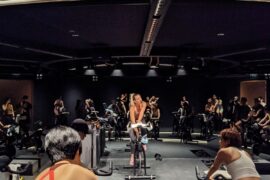 The 2021 Ultimate Guide to Spin Studios in Singapore (Version 3.0) 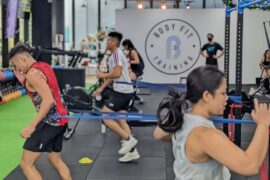