In December 2021, I completed a 2-week trial at Body Fit Training (BFT) Raffles CBD, an outlet of the popular high-intensity interval group training concept located on the third level of 68 South Bridge Road. Founded in 2017 and widely seen as the spiritual (and, to some, the new and improved) successor to rival functional training franchise F45, the Australian brand currently has 16 franchised outlets in Singapore as well as presence in three other countries, including the United States where it has recently inked a $60 million licensing deal as part of an ambitious American expansion plan.

For the uninitiated, Body Fit Training offers 50-minute progressive cardio and strength-based classes, with each class requiring attendees to complete sets at different stations in circuit fashion. Before the workout begins, your instructor(s) will demonstrate each movement to be performed that day across the various stations. TV screens located round the gym floor helpfully display looped demonstrations of the relevant movements as well as the countdown timer for the respective sets and other helpful instructions (e.g. a reminder to stay in your station or time to switch to the next station).

BFT studios also incorporate the popular Myzone innovative wearable heart rate based system which uses wireless and cloud technology to monitor members’ physical activity during the workout, with their live heart rates displayed on separate screens for all and sundry to witness throughout the session. Aside from accountability purposes, heart rates (and the achievement of certain prescribed heart rates upon instruction) often factor into the workouts themselves.

Here are 5 observations of mine about fitness from my BFT Raffles CBD experience.

1. TORTURE CAN TAKE MANY FORMS.

BFT CARDIO HIIT – a High Intensity Intermittent Training session showcasing consecutive short bursts of work at high intensity at each station with extended rest intervals between each station. For instance, a station may consist of 5 sets of 20-second work, with a 10-second break in between each set.

BFT HYPER – a high-volume workout which alternates between upper body and lower body movements as well as activates your stabilisers and your core (think Hamstring Curls using balls while laying on the ground, Farmer’s Walk and Split Stance Romanian Deadlift).

BFT STRENGTH ENDURANCE – features strength training elements but longer periods per set as well as the maintenance of a higher heart rate for endurance improvement.

2. THE BFT PROGRAMME MAKES USE OF MANY, MANY TOYS.

Every BFT studio boasts an extensive collection of different gym equipment within the premises which it will frequently rotate for use across the different workout programmes each day. Within my 2-week trial, I managed to play with the following toys at least once:

Based on the ever-changing workout programme as well as the variety of toys at their disposal, you end up being greeted by a different combination/layout of equipment each time you enter the studio, so the workout proceedings are constantly kept fairly fresh.

The only equipment I have yet to use during my 2 weeks would be the plyo boxes and the trap bars. My most hated equipment? The S-Drive self-powered treadmill, which transports your lower body into novel dimensions of pain during movements such as Mid Grip Runs, Low Grip Walks and Fast Lateral Shuffles. Another notable mention would be the battle ropes, which are probably so named because they put your upper body through an utterly devastating and defeating war. (Can I mention how, during Christmas season, bells were attached to the battle ropes and thus every slam of the ropes onto the ground was accompanied by annoyingly bright and chirpy chiming?)

Save for my years of being a Fitness First member when I was in university during which the only things I gained were dirty looks from haughty beefcakes at the free weights/machines area, I have generally always attended fitness classes at boutique studios, and perhaps in that regard I have been fairly spoiled by certain luxurious aspects offered at these studios. For example, each Ritual Gym shower room usually consists of distinct bathing and dry changing areas; Ground Zero and Division Athletics are fitted with cavernous shower stalls; XYCO Studio provides OMNO amenities as well as Dyson hairdryers; and the most luxurious of them all, Ally Singapore, offers Aesop shower amenities (!). Most of these gyms also have very spacious waiting areas where members can relax while waiting for their class to commence.

At BFT Raffles CBD (and, I suspect, most other BFT outlets), the gym experience is decidedly more frills-free in nature. Guests who arrive too early prior to the start of their class have to either wait in the narrow lift lobby outside the studio or hang out on the ground level before they can be admitted due to safe distancing measures to prevent intermingling with clients from the previous session. The studio dispenses with a dedicated check-in area in favour of a manual roving iPad approach. Members have to bring their own workout towels as these are not provided, although a limited supply of bath towels are stocked for use after classes. Cubbies for your bag storage purposes are fitted outside the unisex changing room, with three shower rooms and two bathroom cubicles available.

I must say, however, that the energetically sunlit space outside the changing room where the bench, cubbies and fridge are located has tremendous potential to be converted to a social space/resting area. I can picture happy spontaneous catch-ups taking place between friends over Fangko Coffee or Taiao Kombucha (both stocked for sale in the fridge) after class…in a non-COVID universe, of course.

4.  TIME FLIES DURING A BFT CLASS.

The Body Fit Training programme prides itself on variety over repetition, and as such you are rarely (or ever) required to repeat the same movement to such a degree that tedium sets in before you switch stations. The frequent movements from station to station mean the pace of each class is kept fairly brisk. Several of the classes involve little rest time between sets, and often these recovery periods end up being spent either transitioning to the next zone or sanitising your equipment. As such, time in a BFT class does feel like it passes really, really quickly, which is great for those who want their workouts to feel time-efficient as well as those who enjoy switching off during a workout and not having time to think about much else.

In addition, the relatively large class capacity of a standard BFT session means people are usually able to book the same classes as their friends, and working out together with a friend (see next section) definitely help time pass much faster.

5. FITNESS IS SUCH A SOCIAL THING.

Fitness studios have served truly essential and invaluable functions during the pandemic. Aside from enabling us to maintain or even improve our mental and physical health during these turbulent times, fitness studios have also offered a safe space for friends (both existing and new) to come together and encourage and motivate each other, especially during times when prevailing governmental restrictions impeded such. During my two weeks at BFT Raffles CBD, I have not just reconnected with old friends but also made new ones, and undergoing the gruelling sessions together does build a certain camaraderie seldom experienced outside National Service settings.

Body Fit Training has always placed emphasis on community-building. The brand’s large catchment across several neighbourhoods and segments means you see a very diverse clientele in class, from sporty boyfriend/girlfriend pairs and work colleagues to gaggles of girlfriends as well as army/hall singlet-wearing bros (you know, the kind who enjoy beer towers at Serangoon Gardens). Prior to class, the instructors would ensure everybody (especially newcomers) is assigned a starting station as well as a workout buddy who would be with you every step of the way during that class. If you happen to be attending on your own, the fact that you have an assigned buddy goes a long way towards ensuring you have company and someone to rely on if you ever encounter any difficulties. If you are attending with a friend, you are assured that both of you can definitely be paired together (which may not be the case in a studio where your bookings are for specific pods).

In that regard, I noticed that most members at BFT Raffles CBD attend classes with their friends or loved ones, and as your eyes scan the room during class you are likely to feel a very strong and palpable sense of community, which is in no small part thanks to the likeable and approachable co-owners of the gym, the jovial uncle-esque Ryan and sunny Esther, who bind the BFT Raffles CBD community together with their friendliness as well as positive energy. It is really true that at BFT (and F45), your instructors do play a large role in the overall client experience.

Click out more stories from my “5 Things I Learnt About Fitness” series:

The 2021 Ultimate Guide to Spin Studios in Singapore (Version 3.0) 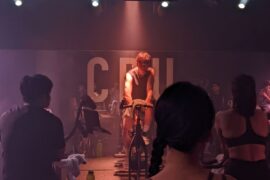 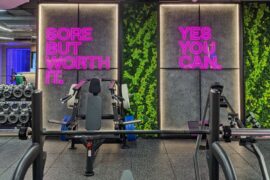