Omoté Singapore launches their new menu on 17 July 2019 (Wednesday), which marks the first major update to their offerings since the move to their current premises in December 2018. While the structure of the menu is largely similar – appetisers, small plates, sashimi, sushi, udons, rolls, chirashis, donburis etc along with a selection of cocktails, mocktails and Japanese spirits – the new menu expands most of the sections with new items as well as introduces more premium offerings for the increasingly discerning diner segment.

Omoté certainly has a remarkable origin story. Since their humble beginnings three years ago as an unassuming 12-seater named Sushiro in the food hall of Thomson Plaza and their eventual disruption of the Japanese casual dining scene in Singapore with their friendly-priced bara chirashi bowls (which spawned an entire sub-genre of dining and countless imitators in Singapore), the concept has gone from strength to strength, tripling their seating capacity after their first move to a shopfront closer to the entrance of the mall before eventually moving three floors up to a space again triple their previous size and now trading under their current Omoté brand.

The restaurant has reached a stage where they have their own range of collectible items bearing the likeness of its mascot polar bear, ranging from soy sauce bottles and plush bears to the limited edition chopstick slips which changes every few months. Social media posts from and about the restaurant have also gone viral several times, including one instance where the humour in the restaurant’s intentionally obtuse and nonsensically grandiloquent captions describing the pictured dishes – supposedly inspired by a staff game of reverse pictionary – flew right over the heads of many and inspired disbelief over the perceived influencer-style pretentious food-writing.

In terms of their offerings, Omoté has come a long way from the dish that put them on the map. While I remember the luxuriously oil-slick Hokkaido Aburi Chirashi Don, the epic Mount Chirashi Don and shiokly-spicy Sanshoku Chirashi Don with fondness, it was my experience with their Salmon Belly Teriyaki Don that truly made me decide to ask the restaurant if it wanted to get a Punggol BTO with me:

“The two humongous slabs of salmon belly – which fit the bowl as well as a Pes E soldier fits into his Primary Six uniform – were so gloriously molten that they were virtually pornographic in mouthly gratification, and so luxuriously oily that said oils were positively and literally dripping off their edges (as the corner of the picture captures). Share with a friend to avoid salmon belly saturation.”

The Chirashi Don section sees the introduction of exciting additions such as Mentai Chirashi Don, Cheesy Spicy Salmon Chirashi Don as well as Truffle Roasted Garlic Chirashi Don, while the Donburi section also gets a mentai update with its Mentaiyaki Beef Steak Don. The new menu also sees the debut of Premium Sushi Donburi, which presents dishes such as the Hinoki Premium Chirashi Don, Uni Ikura Don and the Hokkaido Don in an elegant traditional Japanese wooden hinoki jar. A spiritual successor to the delicious Sanshoku Chirashi Don which is available on the existing menu, the Spicy Triple Chirashi Don introduces a spicy lobster meat to rice bedfellows spicy salmon tartare and marinated diced seafood. The spicy lobster evokes longings for Hawaiian pizza with its alluringly smoky and almost ham-like meaty charms, while the salmon tartare possesses the same ash-fiery feistiness I remember from before.

The memorably smoky Tori Kawa Ponzu (chicken skin) possessed a squiggly crunch and refreshing tartness from the ponzu sauce. The Asari Garlic Flambe, which now uses white wine instead of sake as its base, played it all Two Chefs tze char-esque with its assertive spice, enthralling butteriness and overall appetite-encouraging game, with the sauce begging for a baguette or mantou for some life-bettering dipping. The mod-sin Singaporean-Inspired Chilli Crab was shrewdly audacious in how it turned the classic dish on its head. Sharing significant DNA with the Asari Garlic Flambe in terms of ingredient make-up, the dish possessed a happy crunchiness from the fried soft shell crab and garlic which prevented the sweet chilli crab proceedings from ever getting too sticky and cloying.

One of the new udons available in the new menu, the Spicy Dry Beef Ma-ze Udon plays it all buttery and beefily rich in its slurp-worthy agenda. Fellow beef dish Grilled Beef Tataki was a surprise – whilst the beef tataki itself was commendable for its tuna sashimi-grade softness, it was ultimately a canvas for the gloriousness of the ground wasabi root, which played it all dominatrix-kinky crunchy Chinese pickled vegetables-esque in how it would keep firing explosive, tear-inducing wasabi fumes up your nostrils even though your airways may ostensibly be in sweet wasabi pain. The same perverse ingredient also seized the spotlight in the Wasabi Power Chirashi Don (marinated diced seafood on sushi rice smothered in wasabi mayonnaise) and in terms of power, the mentaiko-creamy wasabi mayonnaise was comparatively more Lee Kum Kee than Lee Hsien Loong.

I cannot conclude this article without making reference to their impressive new physical menu. Containing pages of lovingly-drawn illustrations (my favourite being the page of earnest zoo animal sketches, which I understand were drawn by a team member without professional design training) and lots of heart, the hefty book plays it more like a glossy coffee table book than a selection of food images, and you cannot help but flip through the entire book in close detail. “Welcome to Omoté 2.0”, says the adorably swaggy polar bear dressed in an Omoté-branded blue shark hoodie in one of the opening pages. The message (and indeed, the menu) is so much more than a warm welcome – it is a confident statement of intent. 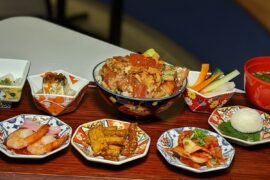 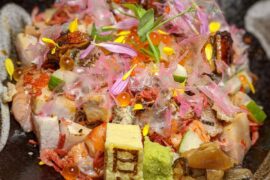