In late August 2018, I checked out the new Waldorf Astoria Bangkok, which has the notable distinction of being the first ever Waldorf Astoria property in Southeast Asia. Occupying the first sixteen floors as well as levels 55-57 of the dramatically magnolia-shaped Magnolias Ratchadamri Boulevard in the upscale Ratchaprasong area, the 171-room property is conveniently minutes away from the BTS Chit Lom station as well as popular malls such as CentralWorld, Siam Paragon and Central Embassy.

The Waldorf Astoria brand has always been positioned as the flagship brand of Hilton’s portfolio, and this being my first ever Waldorf Astoria experience (and given my recent stay at the similarly positioned Park Hyatt Bangkok), I came with hands-folded expectations.

The must-dos (if any): Breakfast at The Brasserie, afternoon tea at Peacock Alley, dinner at Front Room.

THE HOTEL AND AMENITIES

Designed by renown Hong Kong architect André Fu and his design studio, AFSO (they also designed the architecturally and visually acclaimed The Fullerton Bay Singapore and Andaz Singapore), the hotel sees subtle traditional Thai motifs infused into the hotel’s very contemporary design. The wonderfully high ceilings, the often marble and brass elements, as well as the sumptuous application of various opulent shades of blue/green all lend a significant degree of stateliness to the proceedings, and you are likely to traverse the classy white corridors in a state of simultaneous awe and appreciation.

The concierge and the Nordic-Thai concept Front Room are situated on the ground floor, named Lower Lobby; the reception area, French dining concept The Brasserie as well as bar lounge Peacock Alley are located on the fifteenth floor, named Upper Lobby. Further dining concepts Bull & Bear, The Loft and The Champagne Bar are situated across levels 55-57 of the building, and are slated to launch 31 August 2018.

On the sixteenth floor, you can find the outdoor temperature controlled infinity pool, which has the curious distinction of being a rare pool which preserves your porcelain complexion instead of encourage sunkissing, courtesy of the large, tree-like structure in the middle of the pool which performs canopy duties; the 24-hour fitness studio which comes with a sauna, steam room and ice fountain; and the Waldorf Astoria Spa, which focuses on traditional Thai massages.

The 75sqm King Deluxe Suite plays it all oft-brass royal meets air force-blue and matt gold accents. Floor-to-ceiling windows allow glorious sunshine to stream into both the bedroom and bathroom areas with minimal interference, and while you can clearly observe the comings and goings in the various rooftops and rooms around you, the room’s windows are lightly tinted on the outside to ensure less reciprocity in the sharing of your private activities and possible stark nudity.

From the blue pointy hat baskets on the table next to the sofa to the ornately-designed partition at the entrance of the suite, there are various Thai motifs applied across the room’s interior design. The suite comes with one king Waldorf Astoria bed, a living area complete with coffee table and a multiple-cushioned sofa, a walk-in closet with vanity, a work desk that doubles up as a dining table, as well as a 49-inch TV. The air-conditioning, curtains and lights are operated by a bed-side smart navigation panel. Power points are conveniently located at both sides of the bed, the work desk as well as next to each vanity in the room (thus ensuring you can always dry your damp tresses in front of a mirror).

The pantry cupboard next to the entrance is your one stop shop for all in-room consumables, with the electric kettle and Nespresso machine permanently plugged in whilst on their respective slide-out trays. The mini bar is handsomely stocked, from the crystal-cut glasses to the choice of local liquor options such as Iron Balls gin and Chalong Bay rum. Instead of the ubiquitous TWG tea selection across most luxury properties, the room offers organic tea sachets from Thai company Chaidim.

The bathroom boasts double vanities, both a rainshower and a ridiculously deep and massive bathtub (the edge came up to my knees), with an in-bathroom TV system to boot (which was not yet available at the time of my stay). There is also a separate toilet with Japanese-style bidet (?!) which makes sure you need not lift a finger. Amenities are from Salvatore Ferragamo for that uber-luxe factor, with the smells playing it all posh hair salon.

Interestingly, the hotel’s drinking water does not come in bottles, instead being packaged in octogonal-shaped cartons. Used cartons are converted into roof sheets as part of the Thai Green Roof Project to support the underprivileged, so do drink up and keep them streams clear.

I must take a moment to commend the Boca Terry slippers and bathrobe. The former is anti-slip and simultaneously structurally firm yet soft inside, whilst the latter is impossibly luxurious, with an ethereal inner lining possessing the velvety caress of forty-seven chinchillas. Quite possibly the best bathrobe I have ever had the good fortune of introducing my earthly, unworthy flesh to.

All in all, the King Deluxe Suite was close to perfection.

Located on the Upper Lobby, The Brasserie serves French cuisine as well as the hotel’s continental breakfast, while Peacock Alley, the hotel’s lobby lounge and quite possibly my favourite area of the property, serves sweets, light meals and afternoon tea as well as a variety of teas, wines and tea-inspired cocktails. The afternoon tea was irresistibly photogenic, whilst elsewhere the Thai Orchidee tea tasted impossibly posh, with the distinctive notes of the titular flower coming through in the ending moments of each sip with more explicitness than a pay-per-view movie.

The Front Room, which is situated at the Lower Lobby, is a Thai-inspired Nordic concept helmed by Chef Rungthiwa Chummongkhon (also known as Chef Fae), fresh from her various experiences working at Michelin-starred restaurants across Europe. I tried the 10-course dinner and was impressed by the quality of service – almost every other dish had some form of table-side presentation, and the staff was highly attentive in both plate and utensil refreshment as well as the refilling of glasses.

In terms of the meal itself, whilst the first half of the meal (in particular the appetisers) was relatively straightforward and uneventful in its smooth efficiency, things took a dramatic turn from the time “Blue of The Sea” (crab, celery crudite, yellow curry) took the stage. The dish was a playful deconstruction of the Thai soft shell crab egg curry dish, requiring the diner to smash the pastry and mix the elements together to create a riotous mouthly experience that genuinely resembles how the original dish tastes, with the pastry’s occasionally sharp edges being a dead ringer for the crab’s armour.

Other notable highlights include the intoxicatingly smoky and home-style feel-good “Raised in Chiang Rai, Cooked In Bangkok” (chicken, lemongrass, cress, black rice purée), and “Sparrow Grass”, which was a sweet and savoury dessert showcasing asparagus ice cream (?!). “Sweet Bites”, a selection of eight petit fours, included one very, very naughty sweet/salty/spicy orange pastille that conjured a very rude verb in my head in respect of what I felt the pastille was doing to my tongue. A sublime finish.

Designed by New York concept firm AvroKO (they also designed the very Great Gatsby-meets-Manhattan Bar chic Penthouse Bar and Grill at Park Hyatt Bangkok), the dining concepts on levels 55-57 offer breath-taking views of the city, with the blueness of sky being particularly magnificent at 6.45pm. Bull & Bear is the hotel’s grill and seafood concept with an open kitchen concept; The Loft is the hotel’s New York-inspired bar, serving up killer tipples inspired by the original Waldorf Astoria bar book; The Champagne Bar plies the titular liquid gold in an intimate, art-inspired setting.

I was privileged enough to be the first ever guest to experience The Loft as well as preview Bull & Bear and The Champagne Bar, and managed to preview some of The Loft’s signature drinks.

On the beverage front, guests can opt for cold pressed juices (both pure and mixed) as well as smoothies such as the Tropical Smoothie (mango, passion fruit, almond milk) and Breakfast Smoothie (banana, granola, yoghurt, cinnamon). The Brasserie uses Illy Coffee and Mariage Frères Tea. The straws used are environmentally friendly.

The limited number of guests at the property means service is highly attentive. The staff refreshes your plates frequently and regularly check on you. I was pleasantly surprised when the senior French chef at the pastry station offered to reheat my croissant, and personally delivered it to my table.

After the slightly underwhelming experience at the similarly hyped and positioned Park Hyatt Bangkok, I came with a healthy degree of skepticism, and was more than pleasantly surprised that the stay far exceeded my expectations. The magnificently luxurious experience at the hotel was a revelation, in no small part due to the excellent standards of service delivered. Throughout the stay, I always felt ridiculously pampered, and it truly felt ever so slightly sad when it was all over. The Waldorf Astoria Bangkok experience is an unforgettable one, and I am so excited to see where the brand goes from here in Southeast Asia.

This may be my most memorable hotel stay yet. 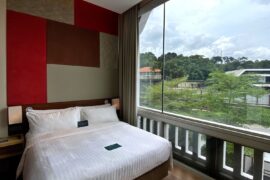 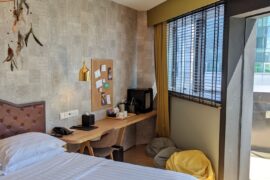 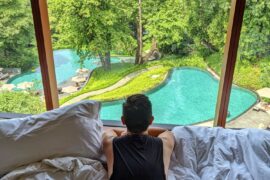