In October 2022, I checked into the Deluxe One-Bedroom Suite at Mandarin Oriental, Bangkok. Spread between two properties on both sides of the Chao Phraya River, the 331-room heritage hotel is a stroll away from Saphan Taksin BTS station and a complimentary shuttle boat ride from the buzzy new ICONSIAM shopping centre. Located within Bangkok’s emerging Creative District, the hotel is close to Bangkok’s Rattanakosin Old Town district, with the Grand Palace, National Museum and the iconic Wat Arun Buddhist temple being nearby attractions. Bangkok Suvarnabhumi Airport is about 40 minutes away by taxi.

The must-dos (if any): Enjoy a riverfront breakfast at The Verandah, take a dip in the swimming pool, go for a buffet dinner at Lord Jim’s, have afternoon tea at Authors’ Lounge, take a boat ride across the river to ICONSIAM.

Launched in 1876 as The Oriental, Bangkok’s first luxury hotel, the heritage riverfront property is often featured on various “best hotels in the world” lists by reputable publications. It joined the Mandarin Oriental Group in 1984, and bears the distinction of being both the oldest Mandarin Oriental hotel in the world as well as the flagship property for the group (alongside Mandarin Oriental, Hong Kong). Former guests include members of the royal Thai family, Michael Jackson, Audrey Hepburn, The Prince of Wales, The Queen of England, Christian Louboutin and Joseph Conrad.

The hotel’s rich and storied history, its association with royalty and famous literary figures such as Somerset Maugham – he reportedly spent much time on his verandah at the hotel in 1923 taking in the sights and sounds of the Chao Phraya river while recovering from malaria – as well as its affectionate reputation as Bangkok’s Grande Dame places it in the same category as the likes of Raffles Hotel Singapore, another beloved cultural icon.

As your car pulls into the hotel driveway, the charming colonial facade and elaborately uniformed bell hops (I ended up buying the Ambassador elephant plushie donning the same outfit) tease what lies ahead. Once you enter the lobby, you would be mesmerised by its grandeur – think soaring ceilings, dramatic bell-like teak light fixtures and chandeliers with dangling Bodhi leaves as well as rich and sumptuous colours and fabrics. The average profile of hotel guest you are likely to observe in the lobby – from chi-chi members of Thai’s high society and formally-dressed wedding ceremony attendees to wealthy Western (older) couples who love their romantic historic properties – would make you wish you had put on your finest jewellery and regret every disgraceful, unseemly crease on your clothes.

After you check into your room, there is plenty to do and explore. The hotel’s rooms, dining concepts and facilities are spread between two properties on both sides of the Chao Phraya River. On the main side, the River Wing and Garden Wing offer the hotel’s rooms and suites, while the historic Authors’ Wing – the original structure of The Oriental – houses the romantic Author’s Lounge, popular for its quintessential Western and Thai-style afternoon tea and much sought after as a premier wedding venue. The Authors’ Arcade offers a variety of shopping experiences, including The Mandarin Oriental Shop for souvenirs and memorabilia. Most of the hotel’s dining concepts are also located within the main premises, including the Michelin starred French restaurant Le Normandie by Alain Roux, jazz venue The Bamboo Bar and popular international buffet destination Lord Jim’s.

If the weather is fair, guests can enjoy an afternoon at the landscaped swimming pool, with sun loungers and private cabanas available based on your preferences regarding sunshine. Service is attentive and exceptional – my glass of water never remained half full for long, and occasionally an ice cream trolley would be carted around the pool serving scoops of cooling coconut ice cream.

Complimentary ferry service from the pier connects you to the other side of the river, where guests can access the hotel’s expansive fitness centre with Muay Thai and yoga studios as well as a relaxation lounge with jacuzzi; cooking school; tennis courts; traditional Thai restaurants Baan Phraya, Terrace Rim Naam and Sala Rim Naam; as well as the famous The Oriental Spa, set within a restored teakwood house and offering various pampering massages, including a most intriguing Cannabis Relax and Restore Massage involving the use of cannabis leaf oil extract and a herbal concoction made with cannabis.

The hotel recently completed renovations of its River Wing, said to be the most extensive renovation in the legendary hotel’s 143-year history and following the refurbishment of the hotel’s Authors’ Wing and Garden Wing in 2016. The project was helmed by Jeffrey Wilkes, who was also involved with other Mandarin Oriental design projects in Hong Kong, Tokyo and Dubai.

Boasting windows which face the bustling Chao Phraya river as well as a private balcony with daybed overlooking the pool, the renovated 83sqm Deluxe One-Bedroom Suite marries European design sensibilities with luxurious Thai touches such as Jim Thompson fine fabrics and teak textures. Elements such as the lotus leaf-inspired carpets, photographs around the suite as well as the statement brass boat above the bed lend a strong sense of place, while the ceiling fan, fresh flowers, whitewashed wooden panelling and textured portraits give the space the feel of a romantic colonial residence.

The expansive living room has a separate dining area. The pantry offers Nespresso coffee and TWG tea-making facilities while the minibar is stocked with a variety of premium spirits and wines (think Louis Roederer champagne, Chalong Bay rum and Grandma Jinn’s Recipe No.1 gin). The bedroom features a grand-sized bed, a window-side seat and a work desk suitable for writing epic love letters to be delivered by carrier pigeon. There are notable technological touches, such as a Bose sound system as well as the “Scenes” buttons around the suite which allow you to adjust the lighting setting to help create the desired mood.

Located on the second level and offering stunning river views through floor-to-ceiling windows, seafood and prime cut grill Lord Jim’s offers luxurious international lunch and dinner buffet experiences – so luxurious, I daresay it may have been my most decadent buffet dinner ever. I revisited the Japanese counter at least three or four times for the fresh Akagai, Hokkigai and Hotate sashimi; pan-fried Foie Gras was free-flow on the buffet menu; the Grilled River Prawns were an alluring blend of smoky and sweet; the Peking Duck was expertly perfect in its ratio of duck, sauce and skin; and the expansive dessert selection ranged from an array of Thai desserts such as Mango Sticky Rice, the adorable Luk Chup (fruit-shaped mung bean dessert), Lod Chong (coconut milk with pandan noodles) and Khanom Buang (Thai crepes with sweet coconut cream) to Western treats such as Apple Crisp, Almond Cake, different flavoured macarons and the indulgently boozy Crepe Suzette.

The a la minute dishes were sensational. The unassumingly-named Chinese Black Chicken Soup came with both dry and fresh fish maw; the Mussels in White Sauce with Garlic Bread and Lobster Bisque Cappuccino soothed the soul; and the Thai dishes (Tom Yam Goong; Blue Swimmer Crab Curry with Wild Betel Leaves; Green Curry with Beef; Stir-fried Chicken with Holy Basil and Chilli) were daringly spicy and bold in flavour. The pasta station allowed you to customise your pasta (think angel hair, fusilli, spaghetti and squid ink), base (e.g. carbonara, tomato, truffle, aglio olio) and choice of premium toppings (e.g. prawn, scallop, bacon, squid), and my scrumptious Squid Ink Aglio Olio with all the trimmings was something I’d pay full price for as a main.

Located on the ground level, The Bamboo Bar stands proud as a Bangkok institution, being the city’s first ever jazz venue when it launched in 1953. The space plays it all colonial charms with chesterfield sofas, ceiling fans, rattan arm chairs and timber textures, with a curated live music programme adding much to the ambience. The place enforces a strict dress code, including a no-backpack rule (?) which did frustrate me a bit, but the team is quite discreet in enforcement and you usually get a free pass before 6.30pm.

For those looking for a good deal, the bar offers a selection of specially-priced cocktails from 5-8pm daily. I had the refreshing Thai Sabai (Mekhong, basil, fresh lime, sugar syrup) and the savoury Smoked Bamboo (bianco vermouth, dry sherry, smoked whisky), but I much preferred my tipples from the classic cocktails menu, and the Algonquin and Old Fashioned delivered what they needed to.

Like the Raffles Hotel Singapore, with which the hotel shares substantially similar DNA, the Mandarin Oriental, Bangkok is a bucket list luxury experience. Guests who wish to meaningfully enjoy the full depth of what the historic property has to offer would need to go for at least one or two of the hotel’s very popular and exclusive dining concepts, and the resulting bill is best justified by the most special of occasions. My meal at Lord Jim’s was nothing short of spectacular – how are some of the offerings free-flow? – and I would definitely return to try the legendary Authors’ Lounge during my next visit. 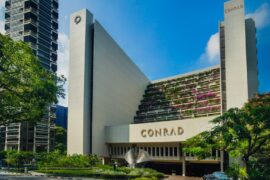 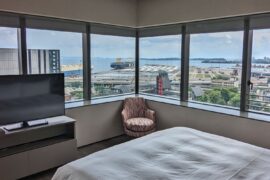