In July 2021, I checked into the Poolside Suite at Goodwood Park Hotel, an iconic heritage hotel situated slightly off the Orchard Road shopping and entertainment belt in Singapore. Established in 1929, the 223-room hotel is conveniently located a short walk away from Orchard MRT station and steps away from shopping malls such as ION Orchard, Far East Plaza, Scotts Square and Tang Plaza. The Central Business District and Changi Airport are 10 and 25 minutes away respectively by car.

The UTW (“Under Ten Words”): Colonial refinement in the heart of Orchard.

Must Dos: Explore the colonial-style premises, go for a dip in the Mayfair Pool, enjoy Taiwan porridge at the Coffee Lounge.

Borrowing its name from Goodwood Racecourse in England, the Goodwood Park Hotel sits on a six-hectare landscaped hillock along Scotts Road, slightly off the main Orchard Road shopping stretch behind Far East Plaza. The property was built in 1900 as a clubhouse for the expatriate German community in Singapore before being converted into a hotel in 1929. Having survived two World Wars, the hotel has been faithfully restored and maintained throughout the years since its reopening in 1947, with its Grand Tower gazetted as a national monument in 1989.

Designed by architectural firm Swan and Maclaren who also designed So Sofitel Singapore, Stamford House (now part of The Capitol Kempinski Hotel Singapore) as well as parts of Raffles Hotel Singapore, the building’s exteriors take inspiration from the castles of the Rhine in Germany. The hotel’s visually impressive Victorian-style facade and iconic turret-style tower sets your visit up on a suitably grand scale, with elegant columns, dramatic archways as well as staircase balustrades lending further helpings of colonial romance. Newspaper clippings about the hotel – some of which date all the way back to its opening days – adorn the walls of the hallways and, together with a display board near Coffee Lounge which charts the hotel’s progress and evolution from the 1900s all the way to present day, add to the hotel’s rich sense of history. Elsewhere, the Tang Treasures Suite on the ground level displays Tang-era artefacts recovered from an Arab dhow wrecked off Belitung Island in Indonesia 830 AD, while a statue of the late Khoo Teck Puat – whose family now owns the hotel – stands tall at the lobby of the tower wing.

Most of the hotel’s rooms and suites are situated within the main building which comprises the Lobby, Mayfair and Tower Wings. The hotel’s Parklane Wing, which offers resort-style split-level apartment suites with fully equipped kitchenettes, is set within a separate building which also houses Frances Beauty Clinic, an external tenant which offers a variety of hair, skincare, medical and aesthetic treatment programmes. Next door, Spa Rael offers massages and facial treatments in a garden enclave setting.

In terms of wellness, the hotel features a modest fitness centre as well as two outdoor swimming pools, both surrounded by rooms and suites which offer direct access. Located close to the reception area and faced by both L’Espresso and Min Jiang, the Main Pool boasts both an impressive maximum depth of 2.6m as well as a separate wading area for children, while the decidedly more private Mayfair Pool plays it all Balinese resort with verdant greenery, vine-wrapped gazebos and ornamental pool vases.

Offering direct access to the Main Pool, the recently renovated 55sqm Poolside Suite conveys a contemporary and residential elegance with natural wood tones, white leather furnishing, herringbone parquet flooring as well as shades of bronze. The spacious suite comprises a bedroom with a wardrobe and pantry area along with a separate living room with a work desk, coffee table and sofa seating. The pantry is equipped with a refrigerator as well as Nespresso coffee and TWG tea-making facilities. Elsewhere, the marble bathroom offers an enclosed rainfall shower space, with bathroom amenities courtesy of Italian fashion house Etro.

While the suite is fully air-conditioned, ceiling fans (every single room in the property is fitted with at least one) and doors which open to a lush outdoor yard and the Main Pool offer the rare option of natural ventilation. Monochrome photographs on the walls depicting yesteryear local scenes by Singapore-based French artist Gilles Massot add lashings of nostalgic flavour.

I must say that the overall proceedings do evoke rather Raffles Hotel Singapore-esque colonial feels.

Breakfast is served at Coffee Lounge, which is famed for their Taiwan Porridge buffet. With its dramatic arches, colonial architecture and generous streams of natural light in the day, the quietly dignified space plays like a cross between 15 Stamford at The Capitol Kempinski Hotel Singapore and The Courtyard at The Fullerton Hotel Singapore. The breakfast is currently provided buffet-style, with kitchen staff behind acrylic shields serving you the usual buffet breakfast offerings such as baked pastries, Western breakfast dishes and dim sum alongside local fare such as Mee Siam, Fish Ball Noodle Soup, Fish Congee and Fried Noodles.

The signature Taiwan Porridge a la carte buffet at Coffee Lounge is available daily for lunch and dinner. The current format allows guests to choose between the Value Tier or the Deluxe Tier (basically access to premium dishes in addition to everything under the Value Tier). The latest menu introduces new dishes such as Pan-fried Minced Pork with Salted Fish, Crispy Chicken with Sweet Plum Sauce, French Beans with Sakura Ebi and Three Cup Chicken while still showcasing perennial favourites such as Fried Omelette with ‘Chye Poh’. My favourites were the Deep-fried Black Pomfret with Sambal and Chinchalok Dip – that savoury dip perked up everything it touched – and the admirably tender Braised Duck Leg with Chinese Spice, Egg and ‘Tau Pok’ in Dark Soya Sauce.

Other dining concepts managed by the hotel include steakhouse Gordon Grill and the adjoining Highland Bar as well as takeaway concept The Deli which offers an assortment of cakes, pastries and hot savoury pies and is famed for its yearly durian and mooncake offerings. Tenant restaurants within the premises include Japanese restaurants Shima and Tatsuya, the Michelin-starred Alma by Juan Amador as well as Thai Village Restaurant.

Beyond the hotel’s strategic location which marries hilltop seclusion and privacy with convenient access to the city’s premier dining and shopping stretch, the recent round of significant revamps to the selected room categories further raises the hotel’s appeal as a destination for leisure stays. The heritage property has always kept a low-key profile in comparison with its flashier contemporaries, which may be why I was rather amazed when I realised how much in common the hotel has with – and how well the hotel stacks up against – its colonial-style cousins. Quite the surprising stay. 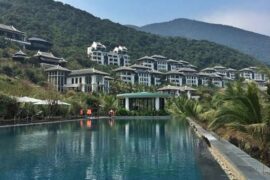 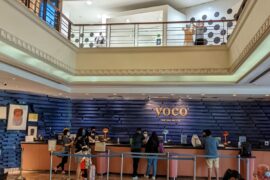