In October 2020, I checked into the Vagabond Club Suite at The Vagabond Club Singapore, A Tribute Portfolio Hotel. Set along Syed Alwi Road within rows of vintage shophouses next to the Rochor River, the 41-room boutique hotel is located in the heart of Singapore’s Central Heritage District within walking distance from two historic heritage districts, Kampong Glam (known for its iconic Sultan Mosque, Instagram-worthy wall murals as well as its alleys of buzzy nightspots and hipster cafes) and Little India (whose attractions include national monument Sri Srinivasa Perumal Temple as well as shopping destinations Mustafa Centre and City Square Mall). The property is about 10 minutes away from Jalan Besar MRT Station and Lavender MRT Station by foot, with Orchard Road and Marina Bay Sands about 15 minutes away and Changi Airport about 20 minutes away by car.

Notable luxury hotels within walking distance include Raffles Hotel Singapore, InterContinental Singapore and Andaz Singapore. The Vagabond Club is one of the two boutique luxury hotels in Singapore under the Marriott Bonvoy programme, with the other being The Warehouse Hotel.

Must Dos: Have the Chilli Crab Omelette for breakfast, enjoy a cocktail at Bar Vagabond.

THE VAGABOND CLUB, A TRIBUTE PORTFOLIO

Managed by the Garcha Group who owns the properties formerly known as Six Senses Duxton and Six Senses Maxwell as well as the upcoming Serangoon House, the boutique luxury hotel is housed within a 1950 Art Deco shophouse building which used to serve as a bicycle shop, an illegal workers’ dormitory and at some stage even a brothel. Fittingly, given its colourful history, the hotel’s shutters and awning bear dark shades of red which tease the libertine naughtiness within, although the building still manages to maintain a large degree of discretion amidst the colourful neighbourhood proceedings (think street dining, automobile industry, karaoke lounges and ahem, some seedy endeavours).

Once you step through the hotel’s front doors, you are greeted by an immersive expanse of scarlet sensuality, luxurious gold gloss and thick velvet curtains. The hotel wears a distinctive Parisian aesthetic courtesy of French architect interior designer Jacques Garcia, who also designed the now-defunct Six Senses Maxwell (the property will be relaunched as a hotel under Marriott’s Autograph Collection in 2021). Dramatic installations and art pieces adorn the premises, from the solid brass rhinoceros desk at the reception area and six floor-to-ceiling golden banyan tree structures around the first level to the Franck Le Ray-designed animal pieces, namely the golden baboon behind the counter of the hotel bar and the pair of life-sized, gold-painted elephants on both sides of the elevator lobby. Baobab Collection diffuser reeds give the hotel spaces an olfactory touch of posh, sophisticated sexy.

The ground floor comprises a reception area as well as sprawling social space the Vagabond Salon which simultaneously houses multiple F&B concepts: hotel bar concept Bar Vagabond; Chinese restaurant Yellow Pot where breakfast is served (the restaurant was previously housed at Six Senses Duxton); the Executive Club Lounge for guests with club access; and the Whiskey Library, which hosts a formidable collection of rare whiskeys as well as a private club membership programme.

A playful and eclectic collection of original and reproduced works curated by British artist Peter Millard adorn the walls of the Vagabond Salon, while elsewhere video installations can be found within the salon’s bathroom as well as in the guest elevator itself, with the elevator’s trippy and slightly surreal “Evolution (Megaplex)” video collage by Marco Brambilla demanding repeated viewings. A black, four-panel folding screen with a gold-leafed heron motif – famously featured in the film Pretty Woman and won by the hotel owners in an auction – stands discreetly somewhere, its significance appreciated only by those who manage to notice one of the various framed screenshots of the scene displayed within the salon which features Julia Roberts next to the screen. In additional, original photography from the hotel owners’ private collection are displayed along the corridors of the guest floors as well as within the guest rooms themselves. The hotel is fiercely proud of its art collection, and all staying guests can request for a complimentary private tour of the artwork around the premises during their stay.

On a related note, The Vagabond Club is the first local property (later to be followed by Raffles Hotel Singapore) to host an artist-in-residence programme for international artists of different styles and mediums to visit the property and gain inspiration for the creation of new works.

Some of the artworks I’ve seen are on the saucier side – think an illustration of a woman lying on her back with legs spread wide open while playful devils flit around her nether ye; a monochromatic portrait of a woman’s torso with only a strategically-placed camera obscuring her womanhood; and the aforementioned video collage in the elevator which depicts, among other things, a scene of what appears to be a robed sorceress aboard a giant penis vehicle dragged by an army of women (!?). Pearls are likely to be clutched.

The hotel does not feature a swimming pool. Those looking for sweaty moments beyond the boudoir can access the GYM Vagabond across the road which features cardio and strength equipment by Life Fitness. (At the point of publication, the gym remains closed until further notice.)

Located on the 4th level and only accessible from the 3rd level via a private entrance, the 68sqm Vagabond Club Suite plays it all European chic, dark woods and plush textures, with a decidedly more masculine feel and restrained approach towards florality in comparison to some of the other room categories. With soaring ceilings which give the space a suitable airiness and calm majesty, the suite includes separate bedroom and living room areas each with their own Smart TV (although, regrettably, HDMI access seems to be blocked on both TV units), toilet and shower facilities as well as skylights with remote-controlled blinds which can cloak the respective rooms in a cosy, intimate night-time darkness if so desired. Both rooms are connected by an intermediate hallway space where the wardrobe, pantry with Nespresso coffee and Basilur tea facilities as well as full-sized refrigerator are located.

The bedroom is equipped with a king-sized bed with Italian-made Egyptian cotton sheets complete with goose down pillows and comforters, a hardwood mahogany writing desk with a Roberts Radio as well as the hotel’s only bathtub, positioned behind a free-standing partition separating the sleeping and bathroom areas of the bedroom. For a more time-efficient cleansing ritual, overhead rain-shower facilities are available in the red-tiled glass mosaic shower space. The suite’s Turkish bath towels and bathrobes bear the regal emblem of the Garcha Group. Elsewhere, bathroom amenities are from ETRO which possess decidedly dispenser shampoo-esque qualities.

Across the hallway, the living room is furnished with purple plush seats and a pull-out sofa bed, with additional pillows and a duvet are stored in cabinets behind the sofa. A multi-panel wooden screen with floral motifs separates the social and bathroom areas of the living room, while an abundance of artworks sit on the walls and shelves of the space – think a massive centrepiece wall painting depicting a woman wearing a cutlery crown who stares at you with fierce intensity, framed French posters as well as intriguing island-inspired and Greek-style face and head sculpture pieces.

The Vagabond Salon houses the hotel’s various multiple F&B concepts: hotel bar concept Bar Vagabond, Chinese restaurant Yellow Pot, the Executive Club Lounge and the Whiskey Library. While table seating is generally reserved for guests having breakfast or dining from Yellow Pot’s dinner menu, there is no explicit demarcation of the other seats based on which menu you are ordering from, which gives the salon space a certain social carefreeness.

Since the closure of Six Senses Duxton, its Chinese restaurant Yellow Pot has temporarily found a new home at The Vagabond Club, offering a streamlined selection of appetisers (e.g. Dim Sum Platter, Fried Prawns with Bonito Aioli), BBQ and soup choices as well as main courses such as Crispy Sichuan Chicken and Wok-fried XO Tiger Prawns XO. The menu includes Yellow Pot’s popular Roast Duck with Plum Sauce and Wok-seared Organic Grass-fed Beef Tenderloin which I had tried before at the former venue. During evening cocktails, I ordered the Fried Lion’s Mane Mushrooms with Avocado Puree which proved to be crunchy, creamy fun.

The Garcha Group’s luxury boutique hotels present distinctive and glamorous luxury shophouse products far removed from the commercial gloss of the major chain hotels. Blessed with a very unique location, the immersive The Vagabond Club experience pairs heritage with indulgent sensorial offerings in a competitively-priced package, and its upgraded F&B programme in the form of Yellow Pot serves as an additional draw. One of the better value propositions under the Marriott Bonvoy programme in Singapore. 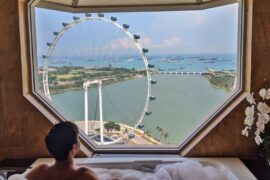 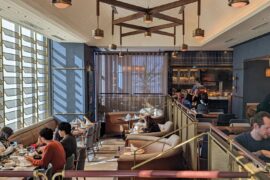