In June 2019, I checked into the Premier Bay View Room with Jacuzzi at The Fullerton Bay Hotel Singapore. Located in the heart of the Central Business District and directly overlooking the dazzling expanse that is Marina Bay, the six-storey and 100-room hotel is less than five minutes away from Raffles Place MRT Station, thirty minutes from Changi Airport and a mere stone’s throw away from heritage landmarks and attractions such as Marina Bay Sands, Merlion Park and the National Gallery Singapore.

Named as one of the World’s Most Luxurious Hotels in the annual Verified Lists by Forbes Travel Guide in 2018, and standing as the best hotel in Singapore according to current TripAdvisor ratings, the hotel is confidently one of Singapore’s most luxurious addresses (possibly even more luxurious than its famous sibling, The Fullerton Hotel Singapore).

The must-dos (if any): Enjoy the sunset bay view from your room, have a swim at the rooftop pool, experience heritage cuisine at The Clifford Pier.

Standing on concrete stilts by the waterfront and characterised by its dramatic, sloping steel and glass-clad exterior, the Andre Fu-designed hotel (he also designed Andaz Singapore as well as Capella Singapore’s Cassia restaurant) is a valentine to the bay, playing it all high-ceiling, contemporary and glamorous refinement while simultaneously celebrating the site’s rich maritime history, from the sketches and photographs of historical buildings that line the hallways to the names of the hotel’s dining concepts – The Landing Point is inspired by the location’s history as a pier which immigrants would pass through, while Lantern references the red beacon for warning ships which used to sit atop the hotel building (or, possibly, the pier’s colourful history of naughty activities which supposedly took place in the ‘80s and ‘90s).

The Clifford Pier, a historic landing point for sea travellers for much of the last century which has since been gazetted as a conservation site, serves as the hotel’s main entrance and lobby in addition to lending its name to the hotel’s buffet restaurant. The namesake restaurant is known not just for its loving send-ups of local heritage cuisine but also its glorious Art Deco-stylings and distinctive roof structure comprising concrete arched trusses, aesthetically awe-inspiring features which have made the space both a much-coveted wedding and celebration destination as well as an essential snapshot spot for both Instagram architecture enthusiasts and symmetry fetishists alike.

The fitness centre, infinity lap pool, jacuzzi pods as well as rooftop bar Lantern are located on the 6th level, which gives them access to unobstructed, panoramic views of the Marina Bay waterfront and skyscraper skyline. (While the hotel does not have an in-house spa, guests seeking spa treatments can make bookings at sister property The Fullerton Hotel Singapore, which is accessible via underpass).

Situated at the far corners on the first level, the 59sqm Premier Bay View Room with Jacuzzi (there are only two in the hotel) plays it all glossy rosewood and chrome textures, with double-glazed floor-to-ceiling windows facing the iconic Marina Bay Sands. Guests can enjoy complimentary use of the Handy phone for internet use and calls as well as an interactive Samsung tablet for room service, hotel restaurant and spa treatment bookings. The pantry is equipped with Nordaq Fresh bottled water, Dean & DeLuca snacks, TWG tea bags, a Nespresso coffee machine with complimentary coffee capsules as well as a modest mini-bar with soft drinks, juices, beer and champagne. The Harmon Kardon bluetooth speaker brings a deep, impressively thumpy bass to the proceedings, and can immediately assist in creating that villa party vibe if you plug in the speaker near the outdoor sundeck.

The bathroom has both a rainforest shower as well as a fitted bathtub. Bathroom amenities are from Bottega Veneta, and (as I noted elsewhere in my review of The Fullerton Hotel Singapore) these marvellous amenities are luxuriously perfumed and leave you smelling like an upper-floor ION luxury boutique even hours after your shower. Guests under this room category are also offered different bubble bath flavours for their foamy pleasure, from the assertive Ylang Ylang and minty Uplifting to the bandung-esque Geranium and spa-style Sensual.

The room’s major draw is the ensuite private jacuzzi on the outdoor sundeck, which lies just inches above the waters of the bay and directly faces the soaring Marina Bay Sands. Aside from feeling like I was Kanye West, Jennifer Lopez or similar as I waved at camera a-clickin’ tourists on their boats as they passed my sundeck (I really should have brought suntan lotion and some chainz had I known about the volume of traffic on the bay), I had the tremendous good fortune of catching the National Day Parade rehearsal fireworks at night while sipping on my Pio Cesare in the jacuzzi, and it must be said that the sheer directness of view and proximity to the fireworks made me feel like the whole spectacle was my own private fireworks display. It was surreal, and majestic.

Breakfast is served at La Brasserie, the hotel’s classic French restaurant with both indoor as well as al fresco terrace seating. Aside from a modest buffet selection comprising Western breakfast sides and Asian options including chicken congee, Nasi Lemak (Malay fragrant rice dish cooked in coconut milk and pandan leaf) and Bak Kut Teh (pork rib dish cooked in broth), guests can order a la carte selections such as the creamy Poached Egg with Comte Monay and Parma Ham Crisp, the thick and juicy Pan Roasted Breakfast Beef Steak or Asian choices such as Chee Cheong Fun (steamed rice roll with toasted sesame seeds and sweet sauce) and Fish Ball Noodles. Whilst the usual coffee and tea choices are available, guests can opt for local beverages such as Teh Tarik (hot milk tea) and Kopi-O (strong black coffee served with sugar, with your choice of either condensed or evaporated milk for the full local coffee experience).

Local cuisine send-ups are sometimes given glossy, contemporary interpretations – I had an indulgent Lobster Laksa which substitutes lobster for the usual prawns, and the well-endowed crustacean provided luscious, formidable crunch amidst the coconut creamy affair. Elsewhere, I noted the appearance of the increasingly ubiquitous Impossible meat in my Oriental Vegetables in Truffled Bean Skin Parcel with Impossible Beef Fried Rice.

Paved with marble mosaics and gold hues, The Landing Point is the hotel’s lounge known for their Western-style classic afternoon tea experience. Elsewhere, rooftop bar Lantern offers tipples and bar snacks paired with clubby beats of house music and a breathtaking and very intimate view of the Marina Bay waterfront.

While I had described elsewhere that my Fullerton Hotel Singapore stay was an exercise in escapist, Crazy Rich Asians-esque indulgence and excess, the Fullerton Bay Hotel Singapore, despite sharing signature Fullerton offerings such as the heritage aspects and the amazing Bottega Veneta bathroom amenities, strikes a majestic chord in a decidedly different fashion, providing direct and intimate access to the bay in a surreal manner quite unlike any other. I will certainly not forget my Premier Bay View Room with Jacuzzi experience anytime soon.

This is one of the few luxury hotel experiences in Singapore which I would dare describe as being ultra-luxury.

This review was written at the invitation of The Fullerton Bay Hotel Singapore. 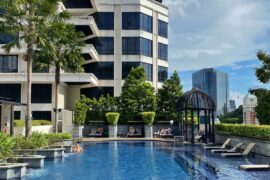 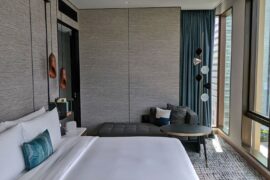 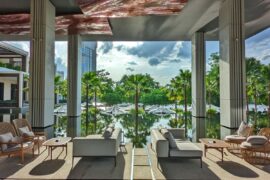